J, T and I went to the Lux again tonight. You may think we were drawn to its stunning new decor but, really, T just promised to buy us ice cream after dinner and Lux is the closest DFAC to the boardwalk.

I saw “Chicken and Mushroom Pie” on the menu at the short order bar but figured it would be one of the not so good casserole style things they make. Consequently, I joined J in lining up for the spicy and delicious sounding and looking “Chili Garlic Chicken”. As I neared the front of the line, I espied someone with a proper looking pie in its little foil plate. So, I got a leg of the chicken then headed off to the short order bar. 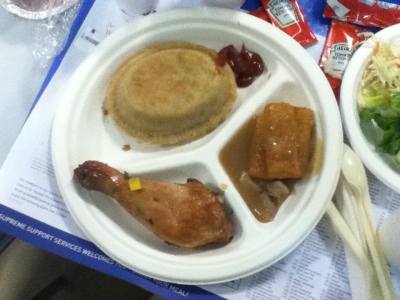 Gotta luv it when everything on your plate is the same colour.

Along with my pie I grabbed some croquette potatoes. These are little deep fried logs of potato that go directly from the freezer bag to the deep fryer to the plate. Normally I like this kind of pre-fab, anti-nutritious food which is made in secret factories by mysterious processes beyond the ken of mere mortals but, meh, I’m sick of croquettes and their pretentious cousins, duchess potatoes. I miss fries.

The meat pie was, as usual, ketchupy goodness which I thoroughly enjoyed. The chicken, probably because I followed the rules, was moist and pretty much perfectly cooked. The skin was nicely crispy too. So, they aced the “chicken” part of the recipe. Perhaps I’m overly optimistic but I kinda assumed that Chili Garlic Chicken would have, oh I don’t know, maybe some sort of chili and/or garlic fucking flavour. Instead it tasted just like…well…chicken. This is, I’m sure, preferable to it tasting like, say, badger or hakarl, but hardly satisfactory. J felt the same and announced that the fried cabbage was the most flavourful thing on his plate. If that doesn’t get the idea of how utterly non-chili-garlicky this chicken was then I don’t know what will.

T had some sort of pasta with what he described as “flour Alfredo” sauce. After dumping on a quarter cup each of shredded cheddar and grated parmesan he pronounced it “edible”. The penchant of the DFAC folks to use way to much flour to thicken soups, gravies and pretty much any sauce that needs thickening is pretty legendary. Dudes, just let it simmer a bit…it’ll thicken. I never, ever get the soups that are offered at almost every meal because the always taste like you’re slurping down a bowl of pancake batter. 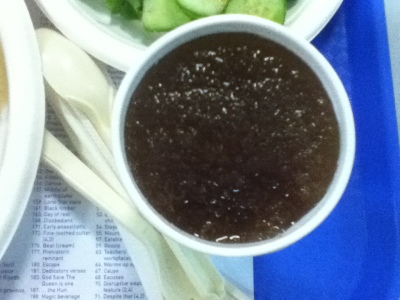 Now that is what I call ICED tea!

The highlight of the meal for me was when T pointed out the iced tea slushie machine. Yay! I hadn’t had one of those since the triple ice cream headache episode.

This time I only had 2 incipient headaches that never quite came to fruition. I guess I’m growing up. They seem to be fine tuning the slushie machines that suddenly showed up in the DFACs over the last couple weeks at first dispensing, unpredictably, either an airy foam or pure liquid. The iced tea tonight was just the right consistency as is the iced coffee at the Northline (most of the time). Nice addition DFAC guys! 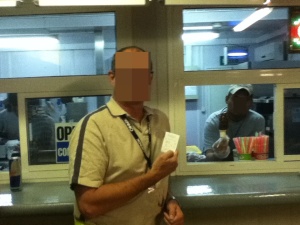 A futile attempt to guilt us out.

As promised, T took us out for ice cream on the boardwalk after dinner and insisted that I take a picture of him with the bill. After he paid, he then reminded me that it was his birthday.  He’d mentioned it a couple of days ago and I made a mental note at the time to forget it which I promptly did. I suspect T is going to send this photo home to his wife to elicit some sympathy. I’m not sure this will work as a few minutes later, she texted him to say she was going out to the local pub for his birthday. I don’t think empathy is her strong suit. Happy Birthday T!

“When I was younger, I could remember anything, whether it had happened or not; but my faculties are decaying now and soon I shall be so I cannot remember any but the things that never happened.” ~Mark Twain

4 thoughts on “Pie and Ice Cream”