During the last couple of days I’ve spent my spare time trying to revive my laptop from some errant coffee so I couldn’t write any posts. Even if I had tried, I would have had to use only words that don’t contain x,c,v, n or m and sentences that don’t require spaces. Also, my number 6 key had developed a mind of its own and would, of its accord, occasionally write “666”. Thank god I’m a heathen or I’d have found that somewhat ominous.

So, I’ve downloaded a small program from CNET that allowed me to disable my 6 key (get ye behind me satan!) and hooked up a USB keyboard. YouTube taught me how to replace the laptop keyboard and an Ebay vendor is sending me a new one for $13 with free shipping. Gotta luv the interwebs!

Time to get at some posts. 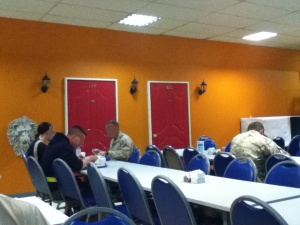 On the DFAC front, T, J and I went to the Lux for dinner last night. Man, we sure got an eyeful when we walked in! The entire interior had been painted and redecorated. When the fuck did that happen? We were just in there last week and it was its rather drab old self. I don’t recall seeing any notices that it was closed but I can’t imagine all that work was done between the midnight and morning meals. Unless, of course, some sort of sorcery was involved. I can’t really rule this out as, along with the general street scene theme of the place, Aslan’s head is inexplicably emerging from one of the walls. Are those wardrobe doors, perhaps? I’m not going to open them to see. Narnia creeps me the fuck out. Ok, enough of my literary phobias. 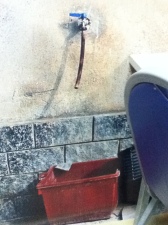 It is, as I mentioned, a sort of street scene motif. There are shutters on the windows, some more doors and, of course, a mural depicting a hose and bucket on one of the interior rocket walls. It’s pretty realistic, kinda cool and certainly fits with the theme but I don’t get how somebody came up with this. “Hey, we’re redecorating the DFAC. Any ideas?” “Shit yeah! Ya gotta get a mural with a hose and bucket on it.” I really don’t see that conversation happening in real life but something akin to it must have…for there they are. T was a little upset as he missed the hedgerow mural that it replaced. Fuck him. I like the bucket. 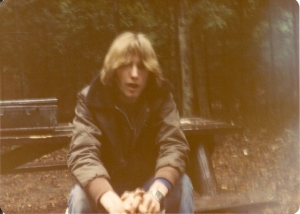 Would it look as awesome in gray?

To accompany the bucket, there is another mural featuring a bicycle and some flowers. This too is kinda cool and I can only assume it came as a companion to the bucket mural. Who knew this shit still existed? The last time I saw a mural like this was on my older brother’s bedroom wall circa 1976. He had the whole thing covered in a Hawaiian beach scene. If this 70’s stuff is coming back, maybe I ought to grow my hair out again. 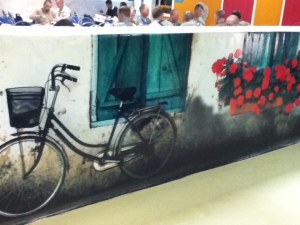 The total effect of the DFAC MakeOver was to really brighten the place up and give it some interest. I don’t really understand aesthetics…hell, I build spreadsheets (based on my wife’s mysterious colour co-ord mojo) to tell me which shirts go with which pants and ties (seriously, I do)…but I think the Lux is quite a bit cheerier now. 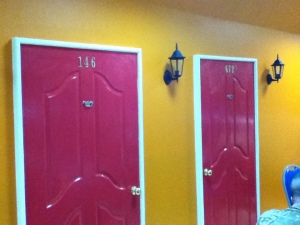 I do, of course, have bit of a bone to pick. Thanks to T for pointing this out…I’m ashamed that I didn’t notice it myself. The door numbers make no bloody sense! Let’s zoom in on the pink doors shall we? Where the hell are 148, 150, 152…well you get my drift? Is it a Dutch street scene or something? The same thing is true for the green doors; they’re 084 and 133. This disturbs my sense of order almost as much as the incorrectly stacked dinner trays (which I always have to straighten) on the way out of the DFAC. They’re designed to neatly nest on top of each other…just do it for chrissakes. But I digress. Using the same digits they had (assuming as with most things in KAF they didn’t have a wide selection), the door numbering person could have numbered one set 612 and 614 while making the other set 374 and 380. Wouldn’t this small change have made the world just a little less chaotic?

Surf and Turf It

T, J, D and I went to Independence Hall tonight. Lo and behold, it was steak and lobster night. Before noticing what was being served, D and J took one look at the long line up on the main steam line and went off for burgers and beans from the fast food bar. I did my usual recce of the place and, upon seeing what appeared to be Atlantic lobster tails, this Nova Scotian joined the line up with T.

For those of you who don’t know anything about lobsters, it’s easy. Atlantic lobster rocks while Rock lobster, ironically, does not. Yeah, the musical version is awesome but, alas, the crustacean version isn’t. Some may say I’m biased because I live 10 minutes from here, but look for yourself:

Which one looks tastier to you? 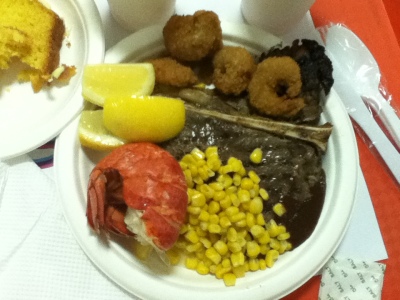 So, T and I finally get our lobster, steak and breaded shrimp. It all looks delicious. The corn was. T liked the shrimp quite a bit though I thought is was a little overbreaded but ok. The steak, on the other hand, was kinda disgusting. Oh, don’t get me wrong. It wasn’t tough…it was oh so mushily tender. If you want to serve steak to toothless people, this is the kind you want. How the hell did they tenderize it? T theorized that they boiled it too long before frying it. I think they got carried away with some sort of tenderizing chemical like MSG. J, looking on, as he enjoyed his burger opined that they had “clunged” it. He was quite proud to have coined a word but, when pressed, could not say what it meant. We’re concerned.

The lobster was blasphemous. It turned into a mushy mess as you took it out of the shell due to, I presume, egregious overcooking. I’ve steamed and boiled a lot of lobster in my day and, yes, I have on several occasions overcooked it. However, my marginally overcooked lobster is just a little tougher and less sweet than the properly cooked stuff not the horrid goo this one was.

On the way back to the village, I said “At least, most of those people have probably never had proper lobster so they don’t realize how bad it was.” D figures there’s a bunch of people thinking “What’s the big deal about lobster, it tastes kinda shitty”.

It’s a pretty miserable DFAC day when the recommended choice on Surf and Turf night is a burger with beans.