DFACS are the Dining Facilities at Kandahar Airfield in Afghanistan. There are 7 of them:

Niagara has always claimed to have North American food. Up until very recently, this meant “a Pakistani villager’s idea of what North American food is like”. While the Pogos, chicken nuggets and anything else that went directly from the freezer bag into the deep fryer was authentically North American, anything with locally made sauce or spices tasted just a little bit funky. However, a couple of months ago they revamped the menu and the food is now much more authentically like home. That means, however, that the lines are really long. I’d eat here all the time but my impatient co-workers hate to line up.

Anti-intuitively, the Far East DFAC is located towards the western end of the base. Intuitively, it features Asian food. Sometimes it’s pretty good and often quite spicy to appeal to the palates of KAF’s Asian workforce. I like really spicy food but the Asian flavours often just don’t taste quite, um, good to me. The stir fry line is usually ok but, while one can re-fry beans, the pre-cooked then refried chicken or pork is just plain nasty.

Ah, the tastes of jolly old England. It is totally different than Niagara; while Niagara served “fries”, Cambridge served “chips”. If Niagara had “iced tea”, the Cambridge’s “chilled tea” was a nice change. Cambridge is best known for its desserts, particularly on Sundays (which is when they also serve the obligatory, tough as leather, overcooked roast beef). While the cakes (or puddings as the Poms call ’em) are always remarkably moistureless, there is always a bucket o’ custard to slop over the top. Cambridge is also the only DFAC with a nightly curry line. While the curries are usually pretty good, the meat, just like the stir fry meat at the Far East, is often reheated, overcooked and icky. 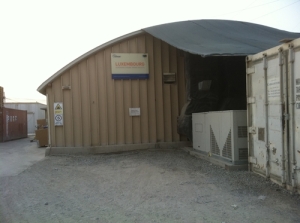 A completely different experience from dining at Cambridge in that the dessert line is in a different place and they don’t have curry. The end. 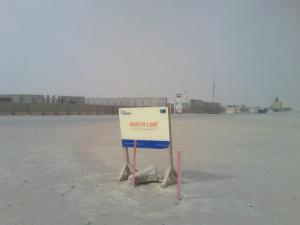 A DFAC with an American theme, it has slightly different menu selections than the other DFACS. It’s main feature is short lines at breakfast and real BACON! 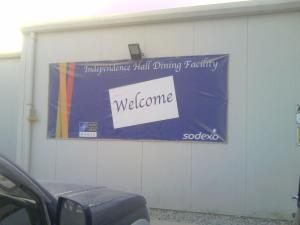 Yet another American themed DFAC. I’ve only eaten there twice and both times they had run out of the menu item I wanted. It quickly went on our “do not eat at list” but I’ve heard they recently revamped their menu a la Niagara so it is worth a revisit.

UPDATE: We’ve eaten there several times and the food is adequate. 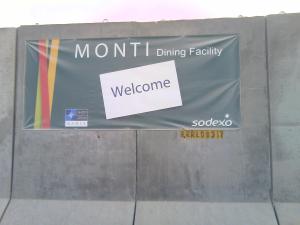 All the best restaurants have rocket barriers.

I’ve heard it’s identical to Independence Hall. It opened only a few months ago and I have yet to eat here. This blog will give me an excuse to do so.

UPDATE: The Monti isn’t half bad now. The Mexican food is particularly good if you know where to find it.