I’m still outta shape, still talk about getting into shape and still hate everything associated with exercise. So, rather than being at the gym, I’m sitting in front of my computer, writing about my good intentions and some other unrelated stuff. How many calories/hour does blathering burn?

Get Off My Back

Yeah, crossfit was a bust. The NATO gym was a frightening, alien landscape. Our little gym had too much cricket. Plus I don’t like to sweat. Consequently, my whole exercise regimen fell off the rails last year. So, what’s made it rear its lactic acid riddled head again? A few things. I weighed myself for the first time in years when I was home on leave last month. I now weigh 45 lbs more than I did in basic training and 20 lbs more than I did when I took this job 4 years ago. 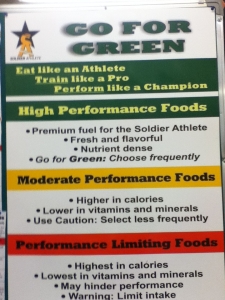 Then there are my ever so pleasant co-workers. All in one day, D was talking about how he watches what he eats and loads up on vegetables; A was guilt-ridden about having missed a day on the treadmill; ML was going on about all the time he and others are spending at the gym. I started to rail at them for making me look bad. Then it dawned on me “Perhaps, I’m making me look bad”. I immediately told that thought to go sit in the corner while I continued to blame the others. 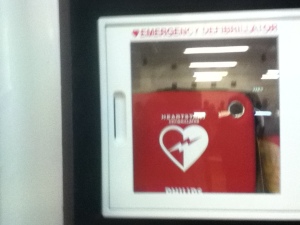 Maybe, however, the most effective impetus towards my pending new health regime is from the North Line. They have this new food classification system called “Go Green” with everything being colour coded based upon it’s nutritional value. No, that isn’t what is spurring me on. “Eat like an Athlete, Train like a Pro, Perform like a Champion“? I woulda paid it more attention had it said “Eat like a Middle Manager. Train like a 50 year old. Perform adequately”. No the thing that’s motivating me is the goddamn defibrillator they’ve got hanging on the wall. I gotta assume there are more people Going for the Red than anyone wants to admit. Are there really people dropping dead from heart attacks in the North Line? Walking by this stark reminder of mortality every day just before I’m about to load up on bacon, french fries and gravy always makes me add a leaf of lettuce to my plate. It’s a start. 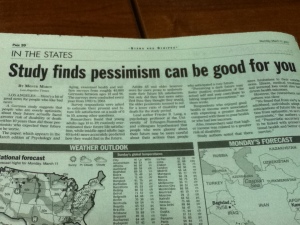 I’ve always known my pessimism would turn out to be a good thing.

In fact, while I was on leave, my wife and I set up a home gym. She had been musing about what to do with one of our many superfluous rooms now that our kids are out of the house and I had just found out I was a fatty. Ironically, yet predictably, I was lazing about on the couch and suggested “Hey, we could turn that room into a gym”. Thanks to the wonder that is Kijiji, 3 hours later we owned a Bowflex and within 2 days, we owned an eliptical trainer. With a hearty “No goddamn way am I using an elliptical without a TV!”, the next day we had a new TV, the cable hooked up and a blu-ray DVD player with Netflix. So far, all I’ve done in my new home gym is watch old Star Trek episodes. Once again, it’s a start.

I’m not overly optimistic that I’ll be able to begin and stick with an exercise plan but, according to Stars and Stripes, that’s ok. 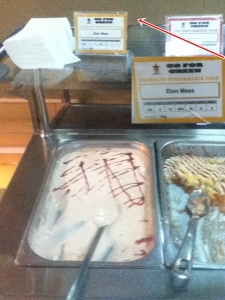 Yeah, it tasted good. So what? 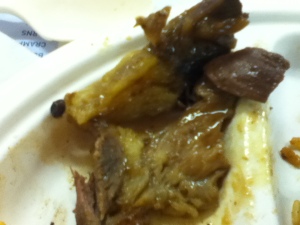 I don’t want to feel compelled to obsessively lick my ass.

Well, North Line, I’ve got a gristle or three to pick with you. Some of these may seem petty but so am I and I’m doing just fine, thank you. The roast beef you served yesterday was hideously dry. I coulda lived with that but take a look at those two pieces. What the hell? I haven’t cut any meat off of them…that’s how they were put on my plate. I can’t even serve that much fat and gristle to my dog because it gives him pancreatitis. I don’t want pancreatitis any more than my dog did although he seemed quite taken with at least one of the side effects. 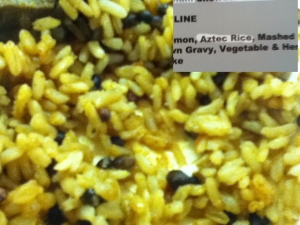 And, hey, why do you put cranberry sauce out on the salad bar at breakfast? D thinks it’s because you’re serving turkey sausages. I think that’s stupid. Here’s a wacky idea…how about putting it out at lunch when you serve the Cornish hens? And I don’t know what the fuck to say about the Aztec rice. Wait…yeah, I do. First…Aztecs didn’t even eat rice. The Spaniards, who introduced rice to the Americas were all, like, “Hey, Aztecs, want some of this stuff? It’s called rice”, and the Aztecs were, like, “Cool, thanks”, but then the Spaniards went “J/k, we’re really just here to take your gold…here, have some smallpox instead, lol”. Second, I don’t know what the hell those little blackish brown things you’ve put in it are but they kinda grossed me out. When bitten, they popped and made the same noise as a beetle that has been trod upon. They tasted kinda woody yet inoffensive but once the idea of bugs got into my head all I could think was “Are they supposed to be in there?” and that was the end of Aztec rice for me. 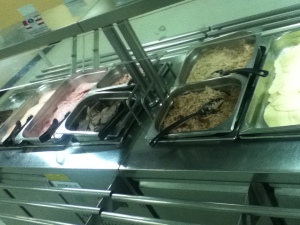 I think I can handle this.

I’ve mentioned before that Monti has a sandwich bar with decent bread and a guy to make your sandwich for you. That’s cool. What I don’t get is why they also have a self serve area with all the same sandwich makings. What, then, is the point of the sandwich bar? Is it really just for the those who are too fucking lazy to make their own sandwich? I made my own tuna sandwich tonight and it was way better than any I’ve gotten at the Monti sandwich bar. While I’m sure the guy tried, he seemed completely unable to appreciate how much I value ratios like bread thickness:tuna:mayo:onions. These numbers are critical and I find his lack of clairvoyance unprofessional. Henceforth, I will consider building my own sandwich to be a workout.

I Can Take A Hint 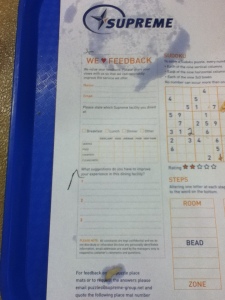 What are you trying to say?

So, I guess North Line saw my comment about comments as they’ve put up new feedback boxes with actual feedback cards now. That’s groovy and appreciated but they could just read this blog. I gotta wonder, however, who the genius was that came up with the idea of putting feedback forms on the disposable tray liners. Yes, these are the grease and food covered tray liners that get dumped into the garbage bins after one’s meal. I’m not sure asking people to fill out the feedback form only to dump it into the bin a few minutes later is sending the right message…or is it?

Making Your Own Fun

Here’s a neat game I came up with that you can play too. I call it “Affect the Affectless”. It’s fun and easy. First, make sure you get in a meal line that is being served by one of those dour, silent DFAC servers who doesn’t make eye contact. As your turn comes up be as fucking cheerful, smiley and gregarious as possible. “Hey, how ya’ doing? Oooh, I’d really like some of that meatloaf; it looks great. Have you tried it? Hey, thanks a lot, have a nice day!” The object of the game is to get some sort of response from them. 1 point if they make eye contact, 1 point for a grunted acknowledgement of your existence, 2 points if they talk and 3 points for a smile. -1 if they slap your food onto your plate with an extra helping of disdain. My high score is 1. No cheating and going to the cheerful guys. Only professionals should attempt this game with that one extra surly man on the North Line short order bar. 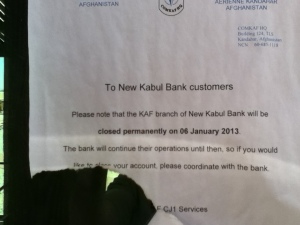 Well, the Kabul Bank is no more at KAF. It took them about two years to open up and only about a year to close. Gee, you think their third world customer service and random opening times might have resulted in less business than they expected? I suspect they had finally taken in enough money to make absconding with it worthwhile. Good riddance. As unreliable as the Afghan International Bank ATMs can be, at least they’re 24/7 and the bank itself opens when they say they’ll be open. 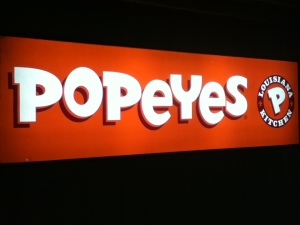 Why is there no apostrophe? Is there more than one Popeye?

D’s been skipping supper and A was working an odd shift so I was left to my own devices for dinner a couple of nights ago. With some trepidation, I ventured out for the second Popeyes experience of my life. The first time I ate at Popeyes it was on the Pearl Harbor naval base back in 1998. I love fried chicken but that shit was oxymoronically greasy and dry at the same time which may not have been too bad if it hadn’t been room temperature as well. I couldn’t even finish it. 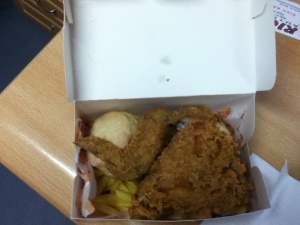 So, I didn’t expect much from the Popeyes at McChrystal Lite as I’ve dubbed the newish mini-boardwalk. Quelle surprise! It was excellent fried chicken. I had the two piece spicy chicken meal. It was hot, crispy and, while the breast was very slightly dry, the wing was perfect. Sure, the fries got a little mushy sitting in that cardboard box on the way back to my room but I could tell they had been cooked in oil of the right temperature. This vast difference in quality between the two places makes me wonder if they’re the same chain. The one at Pearl was called Popeyes Chicken and Biscuits and the KAF one is called Popeye’s Louisiana Kitchen. It did come with a biscuit…which, as a Canadian, perplexes me.

Who knew? Kyrgyzstan has the internet. Congrats! I got 5 page views from there this week. 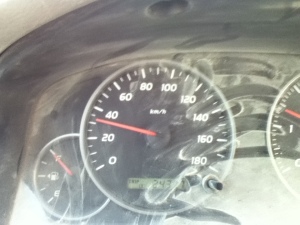 Hey you, yeah, you, young lady in the silver Surf with the right hand drive, it is not necessary to stop at the non-existent stop sign and wait for 20 seconds for the non-existent traffic to clear before you turn. And what? 40 kph isn’t slow enough for you? You can exceed 32  in a 40 zone, ya know. Oh, and you’re allowed to pass cyclists that are traveling at 25 kph. Following them for a kilometre as you pseudo-randomly activate your signal indicating a non-existent intention to pass is kinda infuriating. I know, you did eventually turn left and got outta my way but I really don’t think you had to wait for the two groups of traffic traveling at 40 kph a half mile away to go by before you could safely do that. Have a nice day.

As yet another story about Catholic priests raping children was presented on the TV in the North Line, I opined that no sexually normal male, gay or straight, would ever voluntarily take a vow of celibacy, particularly at the young ages priests typically enter the seminary. “Hell, I wouldn’t have agreed to that for ten million dollars at that age”, I declared. “Yeah, but for a few bucks now…” shrugged D. I’m not that outta shape.

I doubt eating at Popeyes, even if they served spinach, will give me the massive forearms of their namesake much less more conventionally distributed muscle mass so I guess I gotta start getting offa my ass. Fuck.

5 thoughts on “Total Eclipse of the Heart”