Over the last several days, work-related nonsense has sapped my creative energy and, as such, I haven’t posted anything for a while. Similar to my schoolboy days when I would bring a big mouth to a fist fight, over the last week I brought reason and sanity to a policy fight…with similar results. There’s a bit of a truce holding for now so I’ve prepared this rather long, disparate post to bring you up to date on the trivialities of our KAF life. But first, how about another Toyota Surf with a broken wheel holdy-on thingy? 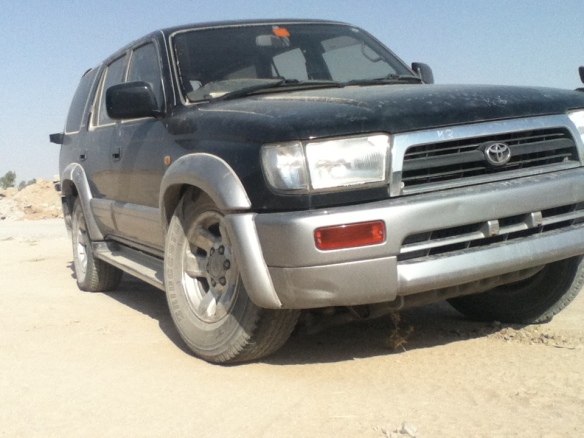 Not That Kind of Towel – An Open Letter

I see your mistake. You think that because we call the wipes in the shower room “paper towels” that that means you can use them as bath towels. Not so, good sirs. Bath towels are made of cloth. If you dry yourself with paper towels in the shower and then rinse them down the drain, I have to call the plumber due to the plugged drains. I then have to respond to his email in which he explains that the drains were plugged with bits of paper towel and asks me not to use paper towel to dry off. It upsets me that the plumber thinks I’m the fucking idiot that doesn’t know to use a bath towel. So, here’s a little suggestion. Don’t be fucking idiots that make me look like a fucking idiot. Use a fucking bath towel. Ugh!

Thank you for your attention.

Oh…and wash your fucking boots outside. 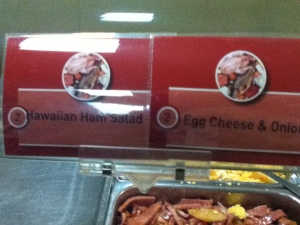 Yum…all it needs is a little Mexican salad dressing.

Why are the layouts of the DFACS so annoyingly inefficient? Monti is probably the worst in that you have to go to about 4 different places to get your meal and there’s only one drink area which always has people gagglefucking around it. Cambridge has lettuce in one spot then you need to go to another line to get tomatoes or cucumbers then back again to a third spot to get salad dressing.

Sure, when they offer salads like “Egg, Cheese & Onion” ,”Hawaiian Ham Salad”, and “Green Beans and Mustard”, you’ve got bigger problems than dressing location. Speaking of Cambridge’s salad dressing…they’re so fucking thin that they just slide right off of anything you put them on. Oh, and they’re goddamn tasteless too. Stop trying to make your own, Cambridge. They aren’t good and scooping that watery mess outta those buckets is kinda unappetizing. Just buy industrially made stuff in the little packets like the rest of the DFACS.

Northline has one of the most efficient setups but I’m not really in the mood to backtrack first thing in the morning. The milk dispenser is well before the bowls and tubs of cereal. Fuck I hate that. 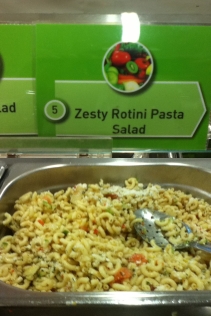 Ok, we’ve been through this before. If you don’t know what kind of pasta you’re serving, just call it pasta or get someone who’s not an idiot to identify it for you. “Rotini: a type of helix- or corkscrew-shaped pasta. The name derives from the Italian for twists”. Do you see any fucking twists? And it wasn’t zesty either. Your sign is only 50% correct. This bothers me almost as much as the milk location. And that’s a lot. 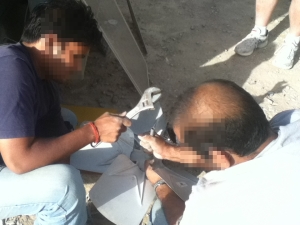 We had some workmen repairing an air conditioner for us. They did a great job and got it done in record time. They certainly didn’t waste any time looking for tools. Wrench, hammer, what’s the difference? It reminded me of the time in Sudan that I watched the locals assembling a prefab building. The guy using a wrench to hammer in a screw was my favourite. And they all wondered why the building was falling apart within a week. The third world is funny. 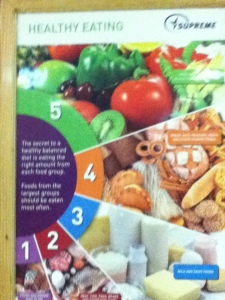 I interpret this to mean: “Eat healthily; leave KAF”.

So the goddam Olympics have started. I’m kinda anti-sport as it is but I’m doubly so when it’s my tax dollars funding it. If you want to spend your life learning to play ping pong or do the incredibly inefficient butterfly stroke better than everyone else in the world, go for it. Just don’t ask me to pay you. The Olympics seem to be a bit of a big deal to some, however, especially the Brits; I guess because they offered the best bribes to the IOC for the privilege of paying for it this year. Consequently, the Cambridge is decked out in its Olympic finery. They even had a cake yesterday. BFBS radio is all Olympics, all the time too. Ugh. It’s nauseating.

Even the tray liners are Olympic themed. There’s a bunch of crap about the ridiculous symbolism of the torch design. Most of it makes some kind of sense in an artistic “ooh, I think that’s so deep because I’m soooo spiritual” kinda way but one of the “facts” is completely incomprehensible. “The torch weighs 800g, to recognize the fact that more than half of the London 2012 torchbearers are to be young people aged between 12 and 24.” What? What the hell does 800g have to do with people being 12-24? I figure the symbolism committee got so used to spouting nonsense that they eventually began just stringing random words and phrases together hoping no one would notice. Well, I did. 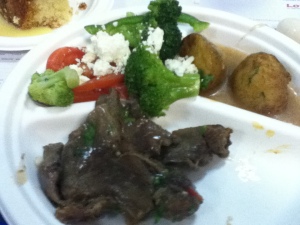 Needs just a few more hours in the cauldron.

At Lux the other night I reluctantly went for the roast beef. It didn’t look very good and tasted even worse. It was one tough hunk of cow. S, who’s been here as long as I have, inadvertently captured our pervasive sense of resignation when he nonchalantly commented “They didn’t boil it long enough”. And, as if that wasn’t bad enough, there was a large group of US Army folks at the next table. Several of them were laughing uproariously at the animated conversation of their tablemates. “That’s too much laughing” commented J. “They must be fucking new here,” I offered, “I hate them”.

Another mockery of surf and turf

It was my 10th wedding anniversary last week. Our wedding was held in our backyard and we served up BBQ steak and lobster. As an aside, my brother, the vegetarian paid for the lobster as our wedding present. He accompanied it with a card that said “A wedding is a celebration of love. What better way to celebrate love than boiling a bunch of crustaceans alive”. He’s quite the romantic. Anyway, it so happened that we went to the Monti on my anniversary and they were serving steak and lobster. It would have brought back many fine memories…if the steak at my wedding had been overcooked and chewy and the lobster had been boiled to the consistency of a superball. If anyone out there enjoyed the lobster at the Monti on 20 July, that’s really sad. You’ve got a standing offer to come visit me in Nova Scotia so you can be schooled in the art of boiling crustaceans alive and learn what they’re supposed to taste like.

A label would make this at least a little less off-putting.

I headed over to the condiment section of the Monti the other day to get some vinegar for my fries. The vinegar was there in it’s usual giant jug, all properly labeled and everything. Beside it was a water bottle filled with yellow liquid. Sure, they always place the olive oil next to the vinegar…I know that. But I couldn’t help flashing back to the last time I saw a water bottle filled with yellow liquid. So, um, Monti, that was olive oil…right?

Here are some random bits of what passes for dinner conversation in KAF.

At the Cambridge:
S – “They should take the water bottles out of the plastic wrap before they stick it in the fridge”
J – “Yeah, cause getting water is soooo hard”
S- “It is. You have the tray in one hand and the water on top was frozen so I had to take one from underneath and they all started to fall”.
J – “I bet you suck at Jenga”.

Driving to Dinner:
M – “You guys don’t like the Asian DFAC?”
Me – “I like Asian food. I like higher end Thai food. I like low end Vietnamese food from little hole-in-the-wall places. I like authentic Chinese food. I don’t like the Far East DFAC…what’s that tell ya?”
M – “It’s Indian food”.
Me – “Hey, I like Indian food”
D – “It’s not the good kind of Indian food. They don’t have bannock.”

M – “The desserts are always the same at the Monti”
Me – “But they’re good desserts.”
M – “Cambridge desserts are intriguing. I like the apple crumble with vanilla ice cream”.
Me – “Eww…the ratio of crumble to apple is way off”.
M – “With ice cream the ratio doesn’t matter”.
Me – “Ratios don’t matter!?! What? You think people could have gone to moon if they didn’t care about ratios? There’s way too much goddamn crumble and it’s in big fucking chunks. They don’t fucking crumble the crumble! Sometimes I think you’re possessed.”
At this point, D, who was in the back seat started laughing in what I can only assume was support of my totally rational position.
Later, in the Cambridge…
D (to M) – “You’re sticking to that comment that Cambridge is better because you like the ‘intriguing desserts’ and you got fucking Jello?”

“A conversation is a dialogue, not a monologue. That’s why there are so few good conversations: due to scarcity, two intelligent talkers seldom meet.” – Truman Capote

“To hell with facts! We need stories!”-Ken Kesey