I know, I know. I’ve bitched about the KAF washroom facilities a few times (here, here, here, here, here, here, and here, for example). Maybe you think I’m being a little precious or I’m too much of a princess for KAF if I can’t handle poo water and urine soaked cardboard. Maybe that’s true…however, you tell me if you wouldn’t bitch about what L found today in one of the rockets just outside the gate where we work. Warning: It’s Fucking Disgusting! Click Here to see the picture (unless you’re a precious little princess). 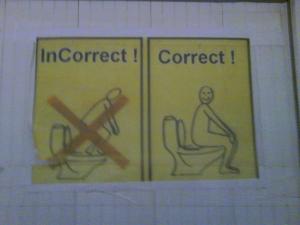 They need to print up a few more hundred of these.

So, what do you make of that? It had to be someone squatting on the damn seat. Fine, in their culture (where cholera is inexplicably rampant), that is how they use a toilet (or, more accurately, a hole in the floor). But, fuck, if I had to use one of the squatter toilets, I would fucking squat. I wouldn’t sit my ass down on the rancid thing just because that’s how I use a civilized toilet. Why the hell can’t these guys just sit down on the damn seat? It’s just like a fucking a chair fer chrissakes.

Ok, just for the sake of venting my spleen, I’ll accept for the moment that they just can’t figure out how to use a non-squatter. Fine. If, after voiding their bowels, they discover they’ve left a giant turd on the seat, why, oh why, would they not use some toilet paper to push it into the hole? Is leaving your shit on a public toilet seat considered acceptable behaviour anywhere in the fucking world? Apparently, it is.

I had thought that an aversion to shit was a naturally evolved, universal human trait. Not so, it seems. When I was in Sudan as a peacekeeper in 2007, I saw locals shitting in the same ditch they would get water out of later in the day. I guess it was hard for them to get out to find a source of clean water because of the 12 hours of torrential rain that had just ended. Now, here in Kandahar, I find people from other parts of the world spraying poo filled water on the floor, leaving a poo stained TP roll on a the floor and, most egregious of all, shitting on the toilet seat.

Nicolas Chamfort has never been to KAF.

“Swallow a toad in the morning and you will encounter nothing more disgusting the rest of the day.” – Nicolas Chamfort

9 thoughts on “A New High In Lows”