The older I get the more stuff there is that I just don’t get and the more stuff pisses me off. I’m ok with this. Since I’ve been about 35, my goal has been to become a curmudgeon. I’ve successfully completed the cranky phase and think I’m in the midst of my pundit era. I figure I’m only a few years away from sitting on my porch, shaking my fist and yelling “Git offa my lawn, you kids!” at which point curmudgeonliness will be mine.

So, in support of my dream, this blog is about some random things that have gotten my goat over the last little while. 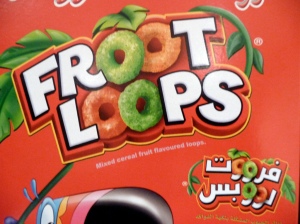 Why is it that brand name foods with Arabic writing on them taste nothing like the real thing and, in fact, taste like shit? I spent 6 months in Sudan about 4 years back as a UN peacekeeper.  I lived in an apartment in Khartoum for the first week or so and on my first outing to get some groceries, I saw Kellogg’s Froot Loops. “Yay”  I think, “I love Froot Loops”. So I get them back to the apartment, pour some into a bowl and that’s when I start to get worried. They’re not the bright day-glo colours they’re supposed to be. Then I taste them. Sure, they were loopy but they sure as hell weren’t fruity. They tasted like styrofoam. What the hell Kellogg’s? It has your name on it and you let this get made? Is this what Arab children have to eat everyday? Do they think this is good? Ugh…I threw them out.

Fast forward a few years and I’m in KAF. The Canadian military guys we worked for had a few boxes of Froot Loops. Seeing Arabic writing on them, I tried just one loop. Once again, styrofoam. So it is on purpose. They have a recipe that tastes good but they don’t let Arabs use it or what? 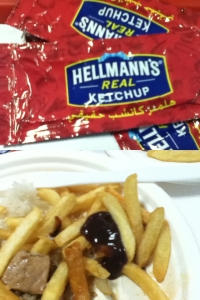 So tonight, I’m in the Monti and get some fries. I grab some packets of Hellman’s Ketchup (yeah, I thought they only made mayonnaise too). Not noticing the Arabic (or perhaps Hindi?) writing on the packs I squeeze some onto my fries. It’s fucking brown! Ketchup isn’t supposed to be fucking brown!

That’s when I saw the telltale writing. What the hell is it with these major food companies? If you can’t trust corporate America, who can you trust?

The only thing I can figure is that they have to prepare the cereal and condiments in some messed up way akin to halal preparation of meat. I mean, halal butchering makes meat taste like crap…all dry and shit. So, I assume god wants them to have crappy Froot Loops and funky ketchup too so demands some weird preparation rituals for fear of eternal damnation. I think hell would be preferable to a life with bland Froot Loops, brown ketchup and tough steaks.

Emergency’s only what? child? Who the hell is Emergency?

You can’t just add apostrophes any time you feel like it or you will lo’ok like an id’io’t. See? If you slept through the grade three class where the teacher explained “change the y to an i and add es”, then don’t make the sign. Give the job to that smart guy in the office who you always pick on but secretly envy. I bet about 100 of these things got printed up and, like the guy with spinach stuck in his teeth, nobody told him. I resolve to be much more considerate of others’ welfare and tell people when they’re morons.

Anytime toilets are shared amongst several people, they tend to be a little less sanitary then what you may enjoy at home. I get that. I’m okay with that. But…there is a limit.

I’ve already talked about the odd signage we see around our new accommodations. As if knowing that kind of stuff was potentially going on was not bad enough, we have to contend with poo water. In addition to or instead of using toilet paper, some cultures use what’s called a spray bidet. This is used to clean the nether regions after a bowel movement (that’s as nice as I can put it). That’s a fine thing…I have no problem with that approach at all. Hell, it probably provides better cleaning than the ol’ toilet paper only routine. However, if you’re going to use that sprayer DO NOT let water bounce off your ass and spray all over the toilet seat, stall walls and floor. There is fucking poo in those ricochets. It makes the bathroom stink and we have to walk through your poo to get to the urinal. And if, god forbid, we have to use the stall after you, we have to wipe your poo water off of the seat and anything else we might touch. Fucking stop it! It’s disgusting.

This really shouldn’t have to be said but: If one decides to wear one’s underwear into the shower for some reason, I would ask that one remove said underwear from the shower when one is done. Yes, one of our guys found a pair of sopping underwear on the floor of one of the showers. It’s a mystery right up there with crop circles as there is no rational explanation for it.

Oh, and I know the sign just said no blowing your nose in the sink but, Mr. Guy who shares our accommodations, I think you’re really missing the spirit of the sign by repeatedly vomiting into the sink as you brush your teeth. Once you’d thrown up five times (hell, I would have stopped after the first upchuck) you may have wanted to stop brushing. For those non-KAF people reading this and thinking I’m making it up…remember, they have to have signs telling you not to pee in the shower! This vomit episode really happened just this morning. Yeah, I know, un-fucking-real. There’s only one activity that it is acceptable to continue after it makes you throw up and that is tequila shots.

That feels better. Is it any wonder I didn’t feel like blogging about food tonight? People…they’re the worst.

I hear ya, Drew. I don’t want to be a stinky poo poo boy…