I got back into my little desert paradise a couple of days ago after several weeks at home. Now that I’m beginning to get over my jet-lag and the 12 weeks of drinking I had to cram into my 4 weeks leave, I’ll soon get back to providing you with KAF’s premier dining guide. 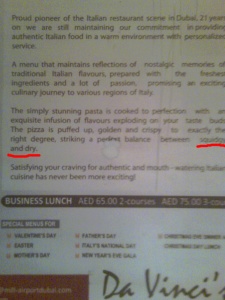 Balance is important-ya need at least a little squidginess in your pizza, right?

While the adequaciousness of the food in KAF is unsurpassed, I gotta admit that I didn’t miss it. Even in Dubai, where they consider getting a pizza somewhere between “squidgy and dry” is considered haute cuisine, the food was mildly better than the average DFAC fare.

At home, however, the food was awesome! Our exchange student’s uni-lingual mother was visiting from Korea so my wife made Jeyuk-bokkeum for her to compensate for our complete inability to communicate. Nothing like sugary, spicy pork to bring two cultures together.

I bbq’d (that’s “grilled” for you Americans) extensively, even inadvertently producing a nice Cajun-style blackened chicken.

I should have sold it on EBay!

Presumably due to my Irish heritage, I have a great love of potatoes (oddly, I don’t really care for brawling while drunk) and made them with most meals while at home. I didn’t really notice the shape of the one at left until I had it peeled. Obviously, it is a manifestation of the heart of Jesus (that’s the only rational explanation). Having been raised a Catholic and finding myself with the body of Christ in my hands, I, of course, ate it.

I flew back here on British Airways. Predictably, the only thing worse than British food is British airline food. I opted for the roast beef over the deep fried marmot or whatever the hell it was the stewardess mumbled to me below the drone of the engines. Better the devil you know I thought. I also figured that, if the Brits could get anything right, it would be the roast beef. I figured wrong. The beef was tender enough but the gravy tasted vaguely of the chef’s tears. I had visions of him sobbing “I’m making fucking airline food” as rivulets of despair dripped from his cheeks into the pot. The soggy, yet surprisingly still tough pudding was a fitting tribute to the rugged Yorkies.

But enough about non-KAF stuff. We’ve had a couple of visitors from our company’s head office here for the last several days. Their impressions of KAF food are a little different from those of us lifers as you’ll see. Coming up very soon:

Dinner at the Niagara eerily similar to a day at the Falls.

Pizza from the boardwalk – Cheese Pizza: I don’t get it.

Independence Hall gets a second chance.

5 thoughts on “Back in the Saddle Again”